The many messages of sympathy received following Phill’s passing all declare shock and consternation at the sudden loss of such a ‘mainstay’ in our lives, people saying ‘It was so good to know this man’. 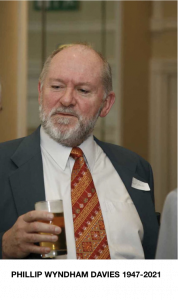 In his teens Phill, his brother Robert and family moved between Gendros and West Cross but he always championed his roots on the Eastside, St. Thomas and St Stephen’s Church.

If there was a family sporting gene it missed Phillip for sure and any artistic potential he may have had would have been drummed out in Dynevor School where he proved to be academically strong, going on to study in Coventry and in time crafting a highly successful career in commercial selling and marketing including overseas posting and Singapore in particular.  On returning the Davies’s lived in Sussex; Michael attended University in Swansea and in time Phill returned to his boyhood town.

His humour, recall ability, perception and love of confectionery had not diminished over time and with languages and language he remained both at home and in command.

Literature, comedy, current affairs, Radio 4, all major pastimes.  He had decided of course to give much of the digital age a wide berth, although daily erudite emails often informative, usually funny and always irreverent will live long among those fortunate enough to have been in the address list.

For so many of course, it will be Phill’s guardianship of the Old Dy’vorian Association in his role as Secretary, which stands out; years of service which were soon to be celebrated as the second longest after George Hounsell in the 90 year history of the ODA.  There was no better man for the job, he had the skill set.  Recognised in school as worthy of becoming a Prefect, he could hold court with the studious and the mischievous with equal respect.  He was a loyal supporter of The Balconiers and will be sorely missed by former and current committee members and the GandI lunch fraternity of which he was a huge part.

But as keeper of the keys, Phill defended the heritage and values of the Association defiantly while actively promoting new links, in particular, with the UWTSD.  The diplomacy he had learned in his career served him well, he could and would listen; he could and would consider; he could and would weigh up issues; approachable and affable, being alongside Phill there was no unease, if you wanted to know something or to take advice…..speak to Phill Davies…..what if he does’t know you say…..ask him again tomorrow.

In order to promote and safeguard values, Phill had enquired into every crevice in the history of the Old Dy’vorians and the school….Armed with that he stood tall for all to see…..he was there, he had always been there, and now sadly he isn’t.  Farewell Phill, Farewell Swee, and thank you.

We are so much richer for your life and so much poorer in your loss.

Given as the eulogy at Llanelli Crematorium Friday 12th March 2021 by Tudor Price.