The School History menu has been split into two as it was becoming too large, with the original items divided between School History and School Life. If you cannot see School Life in the menu please refresh the page.

The School, which in time would be known as Dynevor, opened first as The Higher Grade School for Boys, in Trinity Place in 1883.  “Opened the Higher Grade School last Monday with fifty-one boys in the Upper School Department and thirty eight in the Lower…..many of whom have never been in a public elementary school!”  Headmaster’s log…..10/09/1883

A staff of four assisted headteacher Gomer Jones who quickly moved on to join the local schools inspectorate.  It would be his successor Samuel Roberts, who in spite of numerous challenges would establish the school, and in turn become the longest serving headteacher.

The school, briefly renamed ‘Higher Elementary’ moved to a larger site in Dynevor Place in 1894 with accommodation for 500 pupils.  Formal recognition as a Municipal Secondary School followed in 1907 and while commercial subjects would have a significant if diminishing place in the curriculum the objective and driving ethic was becoming clear, to provide grammar school style, examination based, literary teaching, modelled on the former endowed schools.

It fell to W.A. Beanland having succeeded as Headteacher in 1911, to organise a memorial in 1921 for the fifty-one former pupils lost on military service in the Great War. 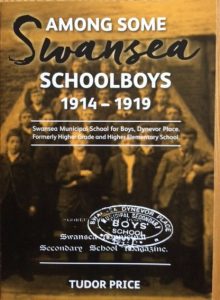 Former pupils, teachers and families are remembered against a background of the newly established Swansea Municipal Secondary School for Boys, later Dynevor Grammar School, where many gained a place before the war.

As the academic reputation of the school was further consolidated, commercial subjects would be lost from the curriculum while the number of former pupils recruited to teaching staff would noticeably increase.

Forty seven former pupils were lost on military service in WW2.  The three nights Blitz over Swansea in February 1941 resulted in significant damage to school buildings, with the top floors destroyed by incendiary bombing.  Civic response was speedy and positive in ensuring continuity of pupil education.  Along with evacuation to neighbouring counties, facilities were shared between Dynevor and the nearby Grammar School, also damaged.  De La Beche school girls (formerly Swansea Municipal School for Girls) also shared other sites and would not return to the pre war building arrangement. 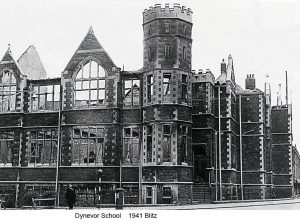 In 1942, W. Bryn Thomas succeeded Llewelyn John and with the coming of the Butler Education Act of 1944 the school was reclassified as Dynevor Secondary Grammar School.

Glan Powell a teacher and former pupil of the school became Headteacher in 1952.  He would make the rebuilding of the makeshift facilities a priority.  The top floor of both blocks would be rebuilt to provide science laboratories and a library, with an Assembly Hall constructed on the corner of Dynevor Place.

Reconstruction was completed in the first years of the next Headteacher, Meredydd Glyn Hughes who took up the reins in 1957.

As the school centenary year approached, W. D. Hubert Davies became the ninth Headteacher.   Structural change would continue with the introduction of Tertiary Education in 1983 and the phasing out of sixth form teaching at Dynevor.

In 1986, Allan Smith became the last Headteacher.  His fifteen year tenure saw, as a result of education policy, an inevitable decline in pupil numbers.  It became his task to supervise the transfer of Dynevor pupils in 2001 to the newly formed Dylan Thomas Community School at the site of the former Dillwyn Llewelyn School.  Dynevor pupils in Years 9 and 11 were able to complete their Key Stage studies at the Dynevor site 2001-2002 with Deputy Headteacher Graham Hanford in charge.

At the suggestion of the Dy’vorian’s Association, former pupils and staff were invited back for ‘a farewell’ gathering on Wednesday 24th July 2002, before finally, the doors were closed.

But wait……The University of Wales, Trinity, St. David would breathe new life into the school premises soon after, developing its School of Art and Design……..an educational tradition goes on and with great success.

The school enjoyed a varied and full sporting and extra curricula calendar.  Highlights shared by former pupils and staff can be found under ‘School Life’.