Brian Burford’s past as an aspiring student whose rejection from Oxford University sparked a downhill spiral only emerged after his death. 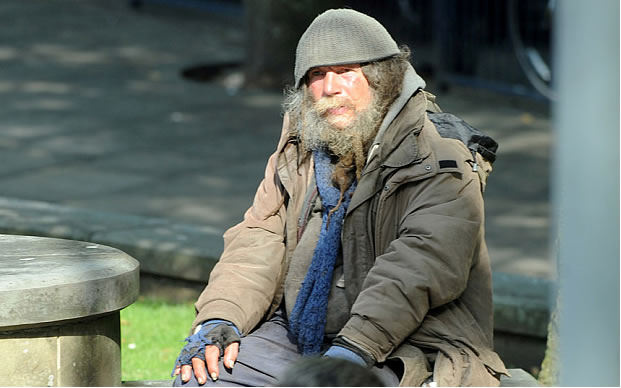 He was known only as Tea Cosy Pete, a tramp in Swansea who became famous for walking 12 miles to return a wallet with £300 inside, then refusing to accept a reward.

But after his death on the streets, Brian Burford’s true identity has been revealed as a grammar school friend of the former Archbishop of Canterbury whose life fell apart after being rejected by Oxford University.

Homeless Mr Burford, 66, spent over three decades living on the streets of Swansea’s city centre, where his distinctive woolly hat earned him his affectionate nickname from locals.

Hundreds of local well-wishers held a service of remembrance for the “true gentleman” Tea Cosy Pete, with many still not knowing his real name.

It was only when the inquest into his death was opened this week that his true identity was disclosed.

Mr Burford, who was from a middle class family, studied at Dynevor Grammar, Swansea at the same time as the former head of worldwide Anglican church.

Dr Williams, the Master of Magdalene College at Cambridge University, paid a warm tribute to his old school friend Mr Burford, adding that he was a man of “complete integrity”.

“I remember Brian very vividly from schooldays, and was very sad indeed to hear of his death,” Dr Williams said.

“He was – even as a schoolboy – a distinctive character: very withdrawn a lot of the time, but then capable of making some observation that surprised everyone.

“I still recall a strange little poem he wrote in class about crowds and loneliness – we rather made fun of it at the time, but I realise now how deeply it was felt and meant.

“He often had a smile on his face, but it was a smile that ever so slightly suggested that the joke was on everyone else.

“I think that’s how he lived his life – seeing differently, with complete integrity.”

Mr Burford was a talented student from a middle-class background who got eight top grade O Levels and three grade As for A Levels.

A close family friend described how his rejection from Oxford University and the death of his brother Bill sent him on a downward spiral from which he never recovered.

Wayne Llewellyn, who grew up close to Mr Burford’s family, said: “He had the best qualifications he could get and made an application to Oxford University and very unfortunately for him he was refused entry.

“I believe his rejection despite his top grades may have contributed to his alternative lifestyle.

“Some years later his much loved younger brother Bill, an outstanding rugby player, was killed as a student in London.”

Mr Burford became famous in the 1990s for making the 12 mile round trip from Swansea city centre to Kittle in Gower, to return a wallet with £300 inside to a man who had lost it in the city centre the previous evening and refusing a reward.

He collapsed from a suspected stroke in Castle Square, Swansea on January 28, and died later in hospital.

His death sparked a huge outpouring of public grief and so far over £3,000 has been raised by locals for a memorial to honour Mr Burford’s life.

A Swansea businessman paid trsaid (sic): “Tea Cosy Pete offered a certain continuity that made many of us feel at home.

“After long flights from East or South Asia and a train journey from Heathrow, I would often pass through Swansea city centre and see Pete. We’d exchange a greeting and I’d immediately feel that I was back in Swansea.

“He was not a multi-billion dollar philanthropist but instead inspired people by his simple, gentle and honest ways which in a world driven by ruthless greed was a breath of fresh air.”