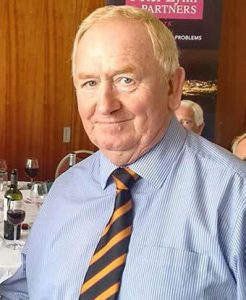 Ken Sharpe passed away after a lengthy illness in July 2021. He attended Dynevor from 1953 and is remembered for his love of sport, especially cricket.

Ken made a career in the insurance booking arm of Barclays Bank serving in various towns in England.  Married to Judy with two sons, Ken retired to Hereford.  He became the Membership Secretary of the Old Dy’vorians, a position he relinquished after becoming the Secretary of Herefordshire County Cricket Club.  He organised golf days at Clyne; and became renowned as the organiser and ‘mine host’ at the annual ODA/ Balconiers lunch at the Glamorgan Cricket Festival at St. Helens.