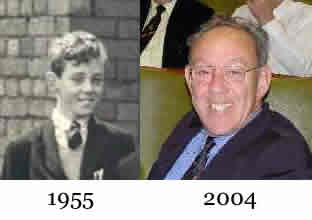 Noel Blows organised a reunion for the entry classes of 1955 at the Mumbles Conservative Club on Saturday 3rd September 2005. His original Evening Post article and his account of the evening can be accessed below.

The Webmaster is grateful for Stuart Winks’ photographic record of the evening and these images can now be accessed. Noel has attempted to identify all the individuals on each photo but, if you can identify anyone in the few cases where he has failed, please contact Noel or the Webmaster.

The Webpage ‘The Class of…’ holds thirteen photographs relating to the ‘Class of ’55’ and Noel is reminding you that further photographs for years 1955 to 1962 are still being sought by the Webmaster for inclusion. Please search out your drawers and attics to help him.

I make no apologies for paraphrasing this old saw about soldiers. Dynevor School, for many pupils, was a good school and our memories of years spent there at school are not easily forgotten. Speakers at The Old Dy’vorians’ Annual Dinner give regular anecdotal evidence of happy times spent at the school, always to the delight of fellow guests. Dynevor School is held in real affection by many who spent their schooldays there.

On 5 September 2005 exactly 50 years will have passed since I with about 120 other boys from all parts of Swansea entered the portals of Dynevor. I had thought for some time that this would be an event worth commemorating. With this in mind I began, about 18 months ago, to establish contact with as many former colleagues from my years at Dynevor as possible. To date I have reached almost 40 – some can be seen peering fresh faced from the accompanying photographs – scattered now across many parts of the U.K. Via the internet I am also in touch with others in Amsterdam, California and Melbourne.

A Reunion Buffet has now been fixed for Saturday, 3 September 2005. A warm welcome will be given to all pupils who came to Dynevor’s First Year in September 1955 and spent anywhere from 5 to 7 years in the school. The buffet equally applies to boys who joined this particular entry year during it’s passage through the school. Anyone reading this article wishing to join in the celebrations – 2 former teachers have already agreed to come – should contact me as below.

Readers may wonder at the desire for a Reunion, querying what was so special about Dynevor that would prompt such an occasion. The fabric of the school buildings left much to be desired in 1955 with war damage still in evidence. The school had no Assembly Hall and met en bloc in nearby Mount Pleasant Baptist Church for many years. It was only in the late 1950’s that new laboratories appeared and an Assembly Hall was built on the corner of De La Beche Street and Pell Street where bomb damage from the Second World War had been in evidence. For 120 of us Dynevor in September 1955 will be remembered because we all had a holiday on our first day at school. Recent heavy rains had flooded our classrooms ! When we did get to school we found a large variety of fungi permeating the classroom walls – the product of a badly leaking roof and a tight educational budget. Dynevor’s geographical location also meant that, apart from the gymnasium, a couple of fives courts and the summer use of 2 concrete cricket nets, all major sporting activities had to be conducted ” off site ” at the playing fields in Townhill and at Bishop Gore School’s swimming pool. By today’s standards these would have been deemed far from ideal.

Somehow the leaking buildings, absence of adjacent sports facilities and poor science laboratories never really appeared to be a hardship. The school flourished because of the quality of the teaching staff and camaraderie amongst pupils and teachers alike. Importantly, what was learned at Dynevor has stood many of us in good stead ever since. It was a happy environment. Interestingly, when approached, almost all have former colleagues have welcomed the idea of a Reunion. My own sentiments have been echoed by many others.

To get a ticket for the reunion please contact Noel Blows on 01792 368768, or write to him at Fermain, 38 Summerland Lane, Newton, Swansea, SA3 4UJ, with email at nrblows.swansea@btinternet.com

I spent almost 2 years endeavouring to find colleagues with whom I had spent some formative years at Dynevor. The exercise was made more difficult for me because I have spent most of my working life away from Swansea. A career in financial services has led me to London since 1970. Overseas secondments to Sydney for 3 years and Mumbai for 4 years followed all of which left thoughts of Dynevor School far from my mind.

I discovered, when I embarked on this project, that no one person had the key to finding former pupils. The absence of school records with addresses did not help. Neither did the latest BT Telephone Directory because many people do not feature in their new slim editions. The need for privacy leads many to go ex-directory whilst others do not qualify for the Directory because they use other suppliers than BT. I found that the chief requirements for anyone tackling a project like this are dogged patience and use of the Internet. Friends Reunited proved a useful website and emailing colleagues a speedy route to access colleagues. The Old Dyvorians’ Association was also very helpful – Edgar McCarthy had been part of the organisation of the Year of 1953/1954 Reunion and provided invaluable advice. So too did members of the Association since many had brothers and cousins in the 1955/56 Year.

My researches finally led me to 75 colleagues who had either started at the school in 1955/56 or who subsequently entered forms in the school where colleagues were present. The Reunion was in the form of an evening buffet. It was held in a private room at the Mumbles Conservative Club – a former pupil is the Chairman – on 3 September almost 50 years to the day since the majority of those present started life at Dynevor School. There were 66 former pupils in attendance together with 4 of the teaching staff responsible for their education! The treasurer and secretary of the Old Dyvorians’ Association were present to photograph the proceedings for record purposes and to plug the Association.

Colleagues had travelled from as far away as Melbourne, Australia, Amsterdam, Dublin, Scotland and all parts of England and Wales. There were those too from all parts of Swansea. Many had come with some level of trepidation – was it a good idea to spend time with colleagues of 40+ years ago? One colleague, Adrian Davies, a superb artist, brought caricatures of the teaching staff which were on view for all to see. These were well received producing much mirth and only serving to increase the interest as we all walked down memory lane. Even 10 of the wives became involved as they enjoyed dinner at a local restaurant.

I have only received positive comments following the reunion with discussion now centring around the frequency of further reunions.