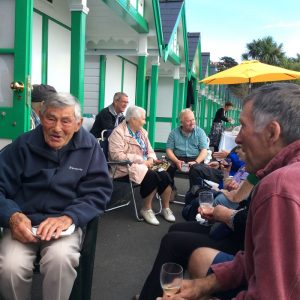 Starting on Friday 4 September with an old school visit, the Year of ’55 enjoyed an extended 60th Anniversary weekend reunion with gatherings on separate evenings at the Marriott and the Patti Raj. These were supplemented with a golf event and a cliff path walk ending in the huts of Langland Bay, where more food and drink was enjoyed in a convivial atmosphere.

On a lesser, but no less enjoyable, scale the Year of ’65 met up on the evening of 5 September to celebrate the 50th Anniversary of entering Dynevor. 17 former pupils got together in the Westbourne to reminisce over a few drinks and then crossed over the road to enjoy a range of excellent curries at the Rose Indienne.

Organisers of both reunions reported that there was a very positive response to the evenings and a general feeling that “we should do this more often!” 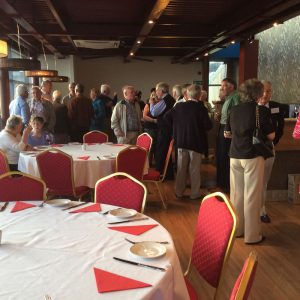 Noel Blows, principal organiser of the Year of ’55 gathering, expressed his hope that those present would “make more of our presence at future ODA Dinners”, although perhaps unsurprisingly “the concept of a Reunion when we’re 81 seems horrendous to envisage!!”

More formal photos on Facebook of the ’55 Reunion are available by clicking here.