In this year the school was known as Swansea Municipal Secondary School, Mr W. A. Beanland was the Headmaster.

The cap was awarded during the 1921-22 season to Tom James, while he was a pupil at the School. 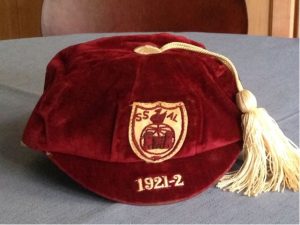 The picture was kindly provided by Tom’s son, Brian James (Year of 1958).

The practice of awarding caps to boys who represent Swansea Schoolboys has long since lapsed.

The School Photographer has recently paid one of his biennial visits and taken photographs of the Forms, the Houses and the Football Teams. (Editorial, p1)

Houses were named after the first Head Master and the first Science Master of the School, two after two eminent Scientists of Swansea (their names have been given to two streets close to the School), and two after two old-established local families, both of which have represented Swansea in Parliament, and have done much for Swansea’s welfare.  The chief living representatives of these families are Sir John Llewelyn and his cousin, Miss Dillwyn. Boys were assigned to Houses according to the Forms they occupied in their first year at School, 1a – De la Beche and Burns, 1b – Dillwyn and Grove, and 1c – Roberts and Llewelyn.  Points are awarded to Houses under three heads: 1. Games and Sports: Football, Cricket, Sports Day and possibly Basket Ball and Fives. 2. School Work: Position in Term Reports. 3. Punctuality. (Ibid. pp 2 and 3)

Photographs donated by Mr A. Smith